How to Add Apps To Vizio Smart TV 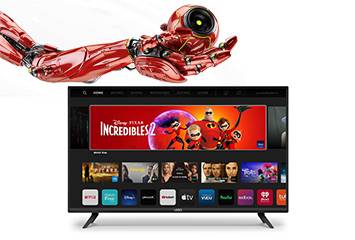 We have noticed some questions along the lines of how to add apps to Vizio smart TV so here is a guide covering this.

Please note: If you are want to get all TV channels and more using IPTV for your Vizio Smart TV then you can add our own Strong IPTV app and use Vizio’s SmartCast to cast it from your smartphone. First, you will want to know if you have an old or new version of the Vizio smart TV.

How To Add Apps To Vizio Smart TV using SmartCast

SmartCast is on the newer version of the TV and has many built-in core apps you can install such as Netflix, YouTube, Spotify, and hundreds more. But in this case, you will be making your own group of apps using SmartCast and not downloading any of these mainstream apps directly.

The method you will be using as this is the only way is casting from your smartphone to the TV but remember the apps you see on your TV actually reside on your smartphone this is just a trick to get many apps working on your TV that doesn’t come loaded in the app store.

Now once the media is cast to your Smart TV you will be able to use your smartphone as normal while your media or app off the smartphone continues to play in the background without issues.

This is for the older model of Vizio smart TV that does not have SmartCast built-in but instead has Vizio Internet Apps or Apps+ or you may know this as VIA and VIA+. To access this you can simply press the V on your TV remote control.

You can find many more apps in the Vizio App Store to download and some older models will even let you download and installed the Google Play Movie and TV app.

How To Remove An App From The Vizio Smart TV

Deleting an app off the Smart TV is easy you just need to go to My Apps hover over the icon to the sub-menu that appears and choose the delete option.

See our guide on casting to a firestick from a chromebook

What Is SmartCast Anyway? SmartCast was released on Vizio Smart TVs in 2016 and is a function where you can easily fling content such as Video, Music, Photos, Apps straight from your smartphone, iPad, tablet, and iPhone.

But not only has Vizio launched SmartCast, but they have also made it compatible with Google Assistant and Alexa-enabled devices, Apple Airplay2, Apple HomeKit, and gaming.

Also, SmartCast works exactly how a Google Chromecast works if you have ever owned or operated one.

简体中文
Want A Free 24hr Trial? Contact Us For A Free Trial! IPTV SALE NOW ON..

Psssst!!! STRONG IPTV SALE NOW ON.. SAVE OVER 50% OFF IN MAY.. CLICK HERE TO SEE OUR SALE PRICES
Get The Latest IPTV News And Tutorials That We Only Share With Email Subscribers